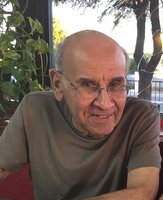 Arnulfo “Zurdo” Manzo, of Tucson, Arizona, passed away on May 5, 2019 after 88 years of a life full of love, practical jokes, baseball and wonderful memories made with his family. He was born on September 6, 1930 in Empalme, Sonora, Mexico to Carlos and Maria Luisa Manzo and was preceded in death by his parents, and his siblings, Carlos and Oscar Manzo, Armida Vela and Ana Rosa de los Santos.

Zurdo grew up in Empalme, Sonora and moved as he pursued his baseball career with teams from Mexico City, Hermosillo, and eventually Bisbee/Douglas, Arizona. His great love of baseball ultimately led him to his soulmate, Concha. They met in Douglas, Arizona where she recalls climbing a fence to watch him play ball. They married in Douglas in 1955 and enjoyed nearly 64 years of a beautiful marriage. During that time, Zurdo left baseball to work for Phelps Dodge Mining Company at the smelter and in exploration in Douglas. Eventually, his work took them to Tucson, Arizona where he continued with the company as a machinist, where he was able to apply his skills learned from his time working on the railroad in his hometown.

In Tucson, Zurdo was an active parishioner of St. Elizabeth Ann Seton, serving as an usher and committed adorer. He loved hiking in the desert or walking around their neighborhood, enjoying nature, especially desert plants and feeding birds. Where many desert details go unnoticed, Zurdo never failed to appreciate a saguaro flower in bloom, a new bird nest, a hummingbird visit, and summer monsoon storms.

Zurdo was a beloved husband, father, grandfather, great grandfather and friend who was committed to his faith and his family. He often shared memories of his work on the railroad, traveling with the Copper Kings, his exploration work in mining and his hometown. These stories were always sprinkled with laughter and life lessons about hard work, loyalty, and pride for where he came from and the importance of approaching life with a sense of humor. He loved poetry and music and could always be counted on to deliver his famous grito wherever a mariachi played. He will be greatly missed, but his legacy and lessons remain in the lives of so many people who were touched by his wonderful life.