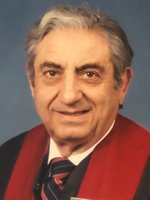 Judge Thomas J. Rallis, age 99,  of Tucson, AZ passed away on October 19, 2019. Born on May 22, 1920 to  John and Sofia Rallis in Diakopto, Greece, he came to the United States through Ellis Island in 1936. He attended Colorado College and Denver University where he received bachelors and masters degrees in Business. He Served in world war II and was stationed in Augsburg, Germany.  He moved to Tucson in 1949 where he owned and operated several popular restaurants. Tom was involved in politics and a community leader. He served as a City Council Member, Pima County Justice of the Peace, the City of South Tucson Chief Magistrate and Pima County board of Supervisor. He was an active member of the Sabbar Shrine, Pima County Republican Club, optimist club, member of the Tucson Chamber of Commerce and  President of The restaurant association. He was President of the St Demetrios Greek Orthodox Church a  life- long member of the AHEPA.

Tom always had the ability to empathize with the people of the community.  No one who met Tom Rallis forgot his passion for his fellow man. He reached out to those that needed help. He was known as the man who could tell a great story.

Funeral Service will be October 23, 2019 at 10:30am. Both services are to be held at St Demetrios Greek Orthodox Church.