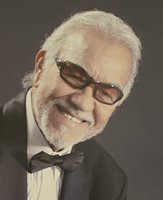 On Friday, October 9,  2020, Cruz Carnero Armendariz, loving father of four children, went to be with our Lord at 90. Cruz was born on May 3, 1930, in Carlsbad, NM, to Martin and Jesusita Armendariz. With an infectious smile, he lived his life with passion, exuberance, and love for everything and everyone. Cruz was the best salesman that ever lived; he could sell flea powder to a flea! Even in his golden years, Cruz continued to fulfill his dreams of singing in public and cutting a CD of Spanish Love Songs. Cruz endured severe health issues but kept going strong. His charisma made him irresistible and unforgettable. Six sisters survive Cruz; Anita, Rita, Esmera, Gloria, Monica, Lupe, and four children, Cynthia, Gregory, Christopher, and Kevin. Cruz had five grandchildren, Zachary, Gabrielle(Thomas), Rafael, Dominic, and Elena. He considered himself so blessed to enjoy five great-grandchildren, Dash, Chase, Bailey, Arrow, Delphine, and a host of nieces, nephews, cousins, and friends. A memorial service for Cruz will be announced at a later date.