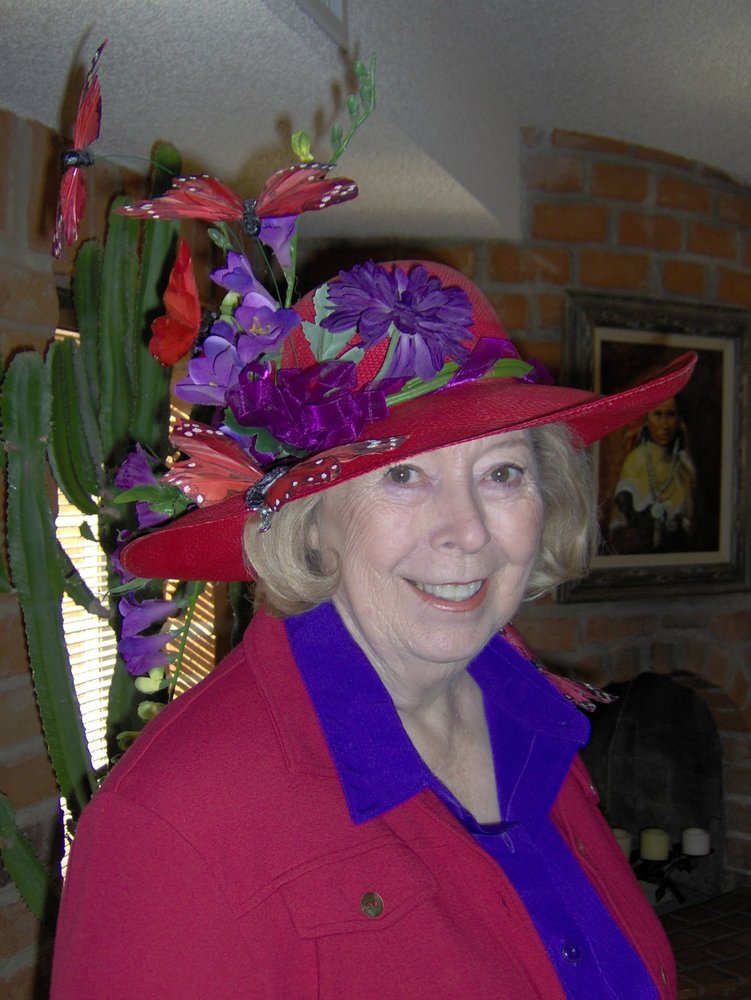 Nancy Gray Anderson was born on July 3, 1932, at the Stork's Nest in Tucson, Arizona. She was a descendant of Arizona pioneers. Growing up as an only child, Nancy had imaginary playmates, kept an invisible dog, and bonded with cousins who were as close to her as brothers and sisters.

Nancy described herself in childhood as a tomboy who yearned to be a veterinarian. She said she was told girls could only be mothers, teachers, secretaries or nurses. Still, she enjoyed “helping” her father in his job as a train conductor for the Southern Pacific Railroad, climbing trees like a boy, and running wild on her cousins’ cattle ranch. During the Great Depression, a spare nickel meant she could watch serial installments of Zorro swashbucklers at the Fox Theater in downtown Tucson, prompting her to chalk the letter Z onto every wall in her neighborhood. To her mother’s despair, Nancy fenced with the boys, wielding a stick as a sword, and she wore a dishtowel as a cape while riding a neighbor’s horse bareback. To Nancy’s despair, she was never able to vault successfully onto the horse’s back without a boost.

During WWII, Nancy did her part for the war effort by growing a Victory Garden, collecting scrap metal, and selling War Bonds with the help of her real (non-invisible) "trick" dog, Dot. At Blenman Elementary, she was chosen to star as Dorothy in the school's stage production of The Wizard of Oz, largely due, Nancy said, to Dot's acting ability as Toto.

Nancy graduated from Tucson High School in 1950 where she was described as a leader (or an instigator of mischief) by her friends. She received a partial art scholarship to the University of Arizona but chose instead to pursue a "more practical" education in Nursing. She attended St. Mary's School of Nursing in Tucson where she was elected Senior Class President and Prom Queen. She completed her medical and psychiatric nursing program rotations in Arizona and California, graduating in 1953 to become a Registered Nurse (RN). Nancy remained close to her classmates, the other Belles of St. Mary's, for the remainder of their lives. Nancy enjoyed attending both THS and St. Mary’s alumni luncheons in Tucson, and she had fun “stirring things up” at St. Mary’s 60th Class Reunion in Las Vegas where, as Nancy said, whatever happened in Vegas, stayed in Vegas.

Upon graduation from St. Mary’s, Nancy embarked on a California adventure with several fellow graduates. The young women traveled from San Diego to San Francisco, working at several hospitals along the way, including VA hospitals in which they treated Korean War veterans. Nancy cut short her travels and returned home to Tucson to care for a family member who was ill. Throughout her life and career, Nancy often changed course or dropped everything to care for family and friends.

In December 1956, Nancy met Ralph Anderson on a blind date arranged by mutual friends. After a whirlwind courtship, the couple eloped in February 1957. Nancy adopted her stepson, Ralph Jr. (Butch), and always wished to adopt his brother Robert (Bobby), whom she finally met for the first time in 2018. With Ralph, she had one daughter, Deborah (Deb), and one son, David.

Nancy worked as an RN for 60 years before retiring. Though she was offered administrative positions and directorships on several occasions, Nancy always declined because she preferred hands-on nursing. Her career spanned several states, including Arizona, California, Nevada, and Colorado, and her experience covered several specialties. Nancy worked in private practice, clinics, hospital medical/surgical, research oncology, and geriatrics, and for many years she was also a home health visiting nurse. At a cancer research center and hospital, she worked with Dr. Elisabeth Kübler-Ross, who pioneered the study of death and dying. Prompted by her experience as a visiting nurse and her need to care for her aging mother, Nancy founded and operated one of the first fully licensed, private adult care homes in Tucson as well as a referral service for seniors seeking private adult care homes.

Nancy served on the Governor's Advisory Board for Adult Care Homes and Assisted Living Homes, helping to write the Rules & Regulations for all such homes operating in Arizona. For 18 years, she
also served as the Continuing Education Chairman for C.O.A.C.H., the Council on Adult Care Homes. After the 9/11 terrorist attack in 2001 in New York City, Nancy was one of the experienced doctors and nurses selected to join the First Response Bioterrorism Team in Arizona. In addition, she served as a disaster relief RN in 2005 for Hurricane Katrina refugees brought to Tucson. Later she was a volunteer RN, vaccinating children and providing wellness checks for homeless war veterans until she retired completely from nursing in 2013 at the age of 81. (Following retirement, Nancy was amused to receive job offers for several more years despite her age, and she said she felt naked without her nursing license.)

Nancy thoroughly enjoyed motherhood and being a mother-in-law and grandmother. As a young mother, she was actively involved in her children's lives, schools, and extracurricular activities. She was a popular Room Mother for elementary school classes, as well as a Girl Scout Leader and a Cub Scout Den Mother. She had fun helping with school activities, field trips, and art projects. As an older mother, when her son David married Kaye, Nancy loved being Mom to another daughter and vowed to be the "World's Best Mother-in-law". Nancy adored her four grandchildren and loved taking a month off work to help the young parents welcome each new addition. As a grandmother, Nancy initiated outings and impromptu art lessons, enjoying the growing children's wide-ranging activities.

In her 60's, Nancy began traveling abroad while on vacation, returning multiple times to Europe, the Caribbean, Australia, and New Zealand. Traveling with a friend or her daughter Deb, she was equally thrilled with accommodations in a Swiss chalet, Parisian pension, Irish castle, Kiwi backpacker’s inn, Australian wildlife sanctuary cottage, Scottish B & B, or an English canal boat. She traveled by plane, cruise ship, train, catamaran and helicopter. She especially enjoyed snorkeling at the Great Barrier Reef as well as off the island coastlines of Antigua, St. Martin, and the Australian Whitsundays. Nancy continued snorkeling, adventuring, and white-water rafting well into her 70's. And though she admired mountain ranges from the Grand Tetons and Swiss Alps to the Remarkables in New Zealand, Nancy always preferred the Catalinas at home.

Near retirement, Nancy joined the Tucson-based Rosie Hattitudes Chapter of the international Red Hat Society; as Vice Queen, she organized entertaining get-togethers and overnighters. She began taking those long-postponed art classes. She joined the Wonder of Color art group at St. Paul’s United Methodist Church and created many sculptures, paintings, and sketches which sold at a variety of venues and art galleries, including DiGrazia's Gallery in the Sun.

Nancy, who had been a life-long caregiver or advocate for family members and friends in need of care, chose in-home hospice care for herself at the end of her life. Her final words were, "There are butterflies, everywhere,” and “I love you." She passed away quietly in her sleep on April 7, 2019 at the age of 86.

Nancy is survived by her beloved family: daughter Deb, son David and daughter-in-law Kaye, grandchildren Trace, Ben, Cooper and Carly, long-wished-for stepson Bob and his wife Kathy and daughter Kira, and multi-generational younger cousins and their families. Nancy, who believed that friends are family you choose yourself, also leaves behind many dear friends who will miss her motherliness, kindness, creativity, and sense of humor.

For those interested in contributing, Nancy’s family respectfully requests donations to a local non-profit organization, a 501 (c)(3) foundation, that provides support, care, and respite for caregivers: The Family Caregiver Foundation www.familycaregiver.foundation