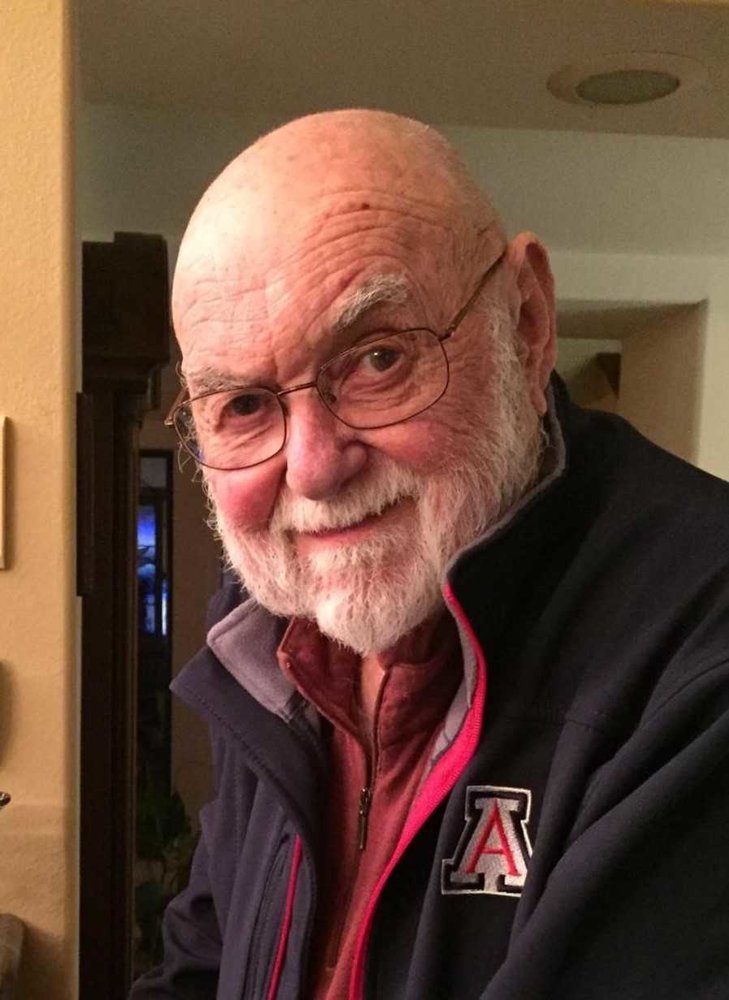 Our beloved father, Marty, passed away peacefully on July 18th. Born August 15, 1925, our dad was a third generation member of the Ronstadt pioneer family that immigrated from Mexico to Tucson in 1884. Dad was very proud of his family's history and spent many hours researching and writing on the Ronstadt’s family adventures in southern Arizona. He met the love of his life, Barbara Sperling, on the steps of All Saints Church, where they married in 1947. Having graduated with the first Pharmacy class at the University of Arizona in 1950, dad would work as a pharmacist in Tucson for 48 years. He proudly served in the Army Air Corp from 1944-45, just missing a dream to fly during WW II. After completing ROTC in college, dad re-entered military service in 1951. Serving as a 1st lieutenant in the Medical Corp of the 25th Infantry Division, he successfully completed a tour of duty in the Korean War. His service during this conflict left him with very strong patriotic feelings for our country.

Dad had a great passion for serving his local church and the Tucson community. He was active in the Arizona Historical Society, the Tucson Boys Chorus, The Tucson Corral of Westerners, local Red Cross and the Tucson chapter of The Flying Samaritans. He had a particular passion for the Knights of Columbus and was a long time member of the Deacon Raphael “Ray” Longtre’ Council 10441 and the Monsignor Don H. Hughes Assembly. He was especially dedicated to the Catholic Priest’s Retirement Fund and worked tirelessly with the Knights at St. Thomas the Apostle Catholic Church as originator and organizer of the annual “Mass and Dinner with the Bishop”.

Dad loved airplanes and was an accomplished pilot. His greatest passion, however, was for his family. His marriage to our mom flourished until his passing - an incredible 72 years! His son, Patrick and brother, Richard, precede him in death. He leaves behind his beloved wife, Barbara and their four children, Michael, Judy (Wally), Tony and Jeffery (Julie). Seven grandchildren also survive him: Amy, Jill, Brian, Garrett, Justin, Jason and Jackson and 10 great-grandchildren.

Our father’s 93 years were filled with sincere dedication and service to his family, his church, and to his country. He lived a very happy and fulfilling life that reflected an uncompromising love for his family. He will be greatly missed.

Visitation and viewing will be held Friday, July 26, 2019 starting at 4:30 pm with Rosary and Knights Chalice Ceremony to follow at 5:30 pm. Funeral mass will be Saturday, July 27, 2019 at 10:00 am. All services will be at St Thomas the Apostle Catholic Church, 5150 N. Valley View Road, Tucson, AZ. A private family burial will be held at a later date at Holy Hope Cemetery. In lieu of flowers, please consider donating to the “Patrick David Ronstadt ’75 and A. Martin and Barbara Ronstadt Family Fund” at Salpointe Catholic High School, 1545 E. Copper St., Tucson, AZ, 85719.

We love you Dad! Arrangements by Angel Valley Funeral Home.