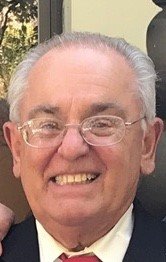 Funeral services will be held on Thursday, July 23, 2020 at St. Demetrios Greek Orthodox Church. Due to the current Covid restrictions the funeral service will be private however an outdoor prayer will be held at 10AM for the public. He will be buried at a later date in Massachusetts.

George was born in Hyannis, MA on August 10, 1949. He attended Boston University and upon graduating was a local DJ on Cape Cod for many years. He married Sophia Karacalidis on March 9, 1973 in Hyannis, MA. He worked as a produce salesman for over 30 years in the greater Tucson area for Durkee Foods International, where he was honored as salesman of the year, Tucson Fruit & Produce, Ron's Produce and Peddler's Sons.

Over the years George was involved with St. Demetrious Greek Orthodox Church. For over 35 years he served as the bar chairman for the church's annual greek festival. He also served the community as Parish Counsel President numerous time. George was the president of the Panathenian Dancers and Order of AHEPA, Chapter 275. He also served as the District Governor of the Order of AHEPA. George coached youth soccer in Tucson for many years and was an avid Boston Red Sox and Patriots fan.

George is preceded in death by Ted Makris, his father, and Micheal Astiknoudas, his stepfather.

George is survived by his beloved wife, Sophia, his two sons, Nicholas and Anthony, his daughter-in-laws, Kenzie Makris and Tiffany Makris, his sister Colleen Montplaisar , his mother Katherine Astiknoudas and his two grandchildren Ty Makris and Jax Makris.

In lieu of flowers, memorial donations can be made to the George Makris Scholarship Fund for future educators, AHEPA 275, c/o Lee Horner,Esq., P.O.Box 2665, Cortaro, AZ 85652.

To send flowers to the family or plant a tree in memory of George Makris, please visit Tribute Store
Thursday
23
July

Share Your Memory of
George
Upload Your Memory View All Memories
Be the first to upload a memory!
Share A Memory
Send Flowers