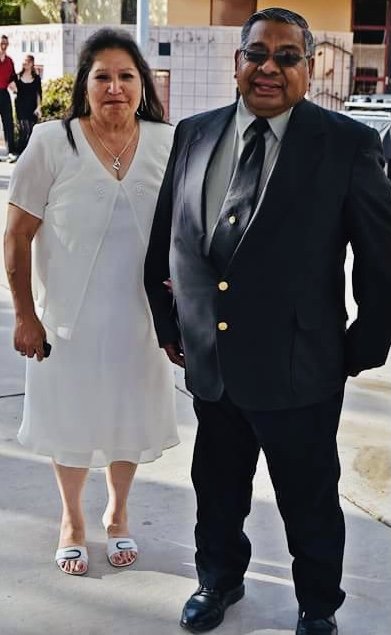 Robert “Bob” Gomez, Sr., 69, died on November 10, 2020, at Tucson Medical Center in Tucson, AZ., from Covid-19. He was a larger-than-life personality whose jokes and laughter shall echo in our hearts for years to come.

Bob was born in Douglas, AZ., on January 31, 1951. He was interested in both sports and music from a young age; as a teenager, he even started a band that played for community events and dances. In 1970, he graduated from Animas High School, and on October 10 of the same year, he married the love of his life: Rosie Anzaldua.

Shortly afterwards, Bob was drafted into the Army. He served as an air gunman in Vietnam, where he was wounded in action and received the Purple Heart for his valor. He returned stateside and was stationed at Fort Carson, CO. for two years.

After being honorably discharged in 1973, Bob and Rosie moved to Cotton City, N.M., where he worked on his in-laws’ farm and helped coach the boys’ baseball team. In 1980, they moved to Playas; for the next two decades, Bob worked at Phelps Dodge Mining Company.

In 1999, Bob and Rosie moved to Deming, where they bought and ran The Cactus Cafe for four years. For the 15 years following, he worked for the city: first in the warehouse and then as a code enforcer, before eventually retiring in January 2018.

Wherever Bob went, he quickly made a name for himself in the community. He served as both a volunteer firefighter and a member of the New Mexico State Police Mounted Patrol, from which he retired after 35 years as a lieutenant. He also was a certified umpire, road test administrator, beloved softball coach, and member of the Knights of Columbus.

His greatest contribution, however, was his mentorship of the area’s young musicians. What began as encouraging his grandchildren to play music evolved into years of nurturing the next generation of mariachi singers and performers. He managed four different touring mariachi groups, helping the teens book gigs, learn new instruments and songs, and grow into caring, respectful adults.

If Bob was a pillar in the community, he was the bedrock of his family. He adored his grandchildren, would drop anything to be there for them, and burst with pride whenever he spoke of them (which was often). Bob also worshiped his wife. For 50 years, rose was the only color he saw; for 50 years, they shared the kind of love people write songs about.

In November, after being admitted to the same hospital as Rosie, Bob wrote her a note: “To my beautiful wife, I just want you to know that I’m here next to you. And that I’m here with you. We need to get better so we can go on our second honeymoon. I love you, Bob.” She died two days later; he died one week after her. Though we are shattered by the loss of a couple who brought so much light and love into this world, we are thankful they never had to live without each other.

Now that he is gone, Bob will be remembered as the life of the party: a jokester who was constantly pulling pranks and making everybody laugh. No matter who you were, you were instantly drawn to him. He was jovial and caring, with a huge heart. He was always smiling, always quick to offer help or advice, and could quickly turn any stranger into a friend. He was also extremely patriotic: proud of his time in Vietnam and an ardent supporter of the police and armed forces. He was respectful, loyal, warm, and kind; a role model who will keep showing us the way through memories we will cherish forever.

Services will be announced at a later date. In lieu of flowers, in-memoriam donations may be made to the Wounded Warrior Project, Ronald McDonald House, or Vietnam Veterans of America. The family also asks Covid-19 survivors to consider donating plasma so fewer people lose their loved ones to this heartbreaking disease.

To send flowers to the family or plant a tree in memory of Robert Gomez, please visit Tribute Store

Share Your Memory of
Robert
Upload Your Memory View All Memories
Be the first to upload a memory!
Share A Memory
Send Flowers
Plant a Tree