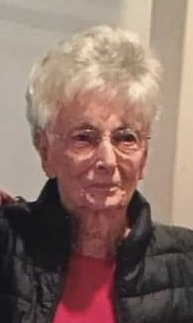 Raised on Nantucket Island, she met her beloved husband, Nelson, while he was stationed there with the Coast Guard. They were married in 1952, on Nelson’s parents’ 30th anniversary. Margaret was a dedicated military wife, settling with Nelson in Arizona. Upon retirement, they spent much time RVing across the USA and Canada. She was the “tour director” of their trips, planning their social & sightseeing schedules. She also enjoyed her family immensely, as well as cooking, gardening, craft projects, and volunteering at Our Mother of Sorrows, St. Vincent de Paul.

She was predeceased by her husband, Nelson, her parents Elmer and Theresa Davis of Siasconset. She is survived by her children Lindamarie, Elaine Duarte López (Gilberto), Nelson (Carol) and Sandra, seven grandchildren, eight great-grandchildren and a great-great grandchild.

The family would like to thank Brookdale Tanque Verde, and in lieu of flowers, requests that donations be made to a charity of your choice. Interment will be with Nelson in Massachusetts National Cemetery on Cape Cod at a later date.

To send flowers to the family or plant a tree in memory of Margaret Duarte, please visit Tribute Store

Share Your Memory of
Margaret
Upload Your Memory View All Memories
Be the first to upload a memory!
Share A Memory
Send Flowers
Plant a Tree