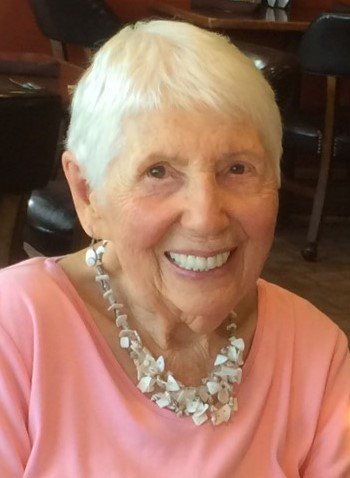 Janelle Snyder Larsen lived her life enriching the lives of her family and friends. She died in Tucson, Arizona, of natural causes on January 18, 2021 at the age of 98.

Born at home in West Blockton, Alabama on July 22, 1922, Janelle was the first of the three daughters who blessed Mattie and Elijah Snyder. Growing up in the South during the Great Depression gave her tremendous empathy for others. Even as a child, Janelle had a sense of adventure and frequently expressed an eagerness to venture outside Alabama and see the world.

While still living at home, Janelle and her sisters took turns working in the family's general store. Her love of business began at a very young age when her father put her in charge of the candy case. Entrusted with ordering, display, and managing the confectionary profits, Janelle proved successful at contributing to the modest family income.

A keen intellect and strong interest in food and nutrition lead Janelle to attend the University of Alabama where she majored in Dietetics. Two years into the program she met Keith Alden Larsen while she was working as an administrative assistant at Foster Field Airport in Tuscaloosa. They married in 1943.

When Keith joined United Airlines in 1944, the couple moved to Denver, Colorado where he attended flight school. During that time Janelle fondly remembered working in a department store and building lifelong friendships with other pilot’s wives.

Following the training in Denver, Janelle and Keith moved to New York City where Keith was based for almost two years. While in New York, Janelle recalled experiencing historic moments in Times Square like the celebration following the end of WWII. She loved the excitement of the city, it’s theater district, and she frequently attended live radio broadcasts featuring upcoming stars like Perry Como and Frank Sinatra. The diverse cultures in New York expanded her cooking skills and her palate. She would have an enduring affection for the city, returning yearly with her children to enjoy the Christmas program staring the Rockettes at Radio City Music Hall.

In 1946, Keith’s domicile was moved to Chicago where the couple welcomed their daughters, Barbara and Kay, two years apart. Daughter Lisa was born in 1959. Those young family years were spent in Park Forest, Illinois, where Janelle was active in Women’s Club and volunteer activities. She was instrumental in establishing the first Civil Defense emergency plan to be implemented in Cook County.

In 1977, after 31 years with the airline, Keith retired and the couple moved to Tucson, Arizona. Janelle embraced her new home in the desert where she learned to play tennis and developed many close and lasting friendships. It was in Tucson that Janelle put her talents to work as a partner in the Sous Chef catering business. Following Keith’s death in 1997, Janelle, her daughter Lisa, and son-in-law Bob made a happy home together for almost two decades.

An inspiration to her family, Janelle was known throughout her life for her boundless energy, optimism, wisdom, and generosity of spirit. As the years advanced she became the family matriarch, eagerly engaged in the lives of her beloved grandchildren, nieces and nephews. She had a way of making everyone feel special. “Because they are special”, she would tell you.

Janelle’s loss is deeply felt by her surviving sister Barbara, and her devoted daughters Barbara and Lisa. She will be greatly missed by her benevolent sons-in-law Bob Erickson and Bob Ratliff. The adoration of her grandchildren Erik, Nina, Michael, and Aaron is a lasting tribute to her love and steadfast guidance.

No services are planned. Post pandemic, family will gather in Northport, Alabama where Janelle will be buried alongside Keith, her parents, and other family members.

Share Your Memory of
Janelle
Upload Your Memory View All Memories
Be the first to upload a memory!
Share A Memory