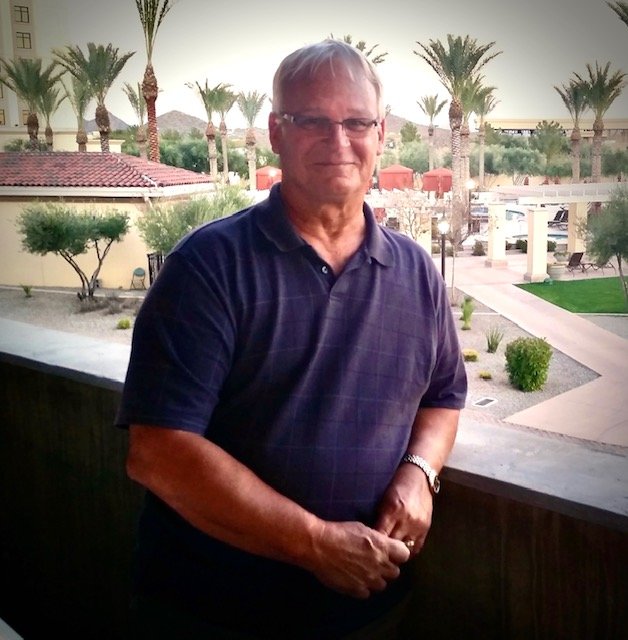 Dan Jeffrey Harmon, age 72, passed away peacefully at his home on Tuesday, August 3, surrounded by his family. For 4.5 years, he fought a battle with prostate cancer with dignity and grace.  During his battle, he remained optimistic, always with a smile, continued to travel spending time with his family and lived life to his fullest.

Dan was born on January 27, 1949 to John and Mildred Harmon in Ottumwa, IA and was raised in Eldon, IA.  He graduated from Cardinal High School in 1967 and then enlisted in the U.S. Air Force in 1968 and proudly served stateside and in Sevilla, Spain until 1972.  In 1974, Dan met his soulmate, Elaine Cox and they were married on August 3, 1974 and spent 47 wonderful years together, raising their family in Muscatine, IA and retiring in Tucson, AZ in 2016.

Dan was very passionate about his career as a Rock Island locomotive engineer, unfortunately, the railroad folded and he started another career at the Grain Processing Corporation in Muscatine, IA and retired from there.

During the years raising his children, Dan was very involved in all of their lives and their many activities. As a family, they spent many years in their pool together and boating. A lot of weekends would find the family at various racetracks. Dan loved to travel and was always ready for his next trip. Many of these trips also included the family and beautiful memories were made with his children and grandchildren, which they will always cherish. Dan was a big car buff and after retiring, he was able to live out one of his dreams and bought a drag car and raced for many years. He was always a kid at heart.

If Dan wasn’t spending time with his family, you could find him working in his yard creating beautiful flower beds and landscaping.  His lush green yard and flowers were always admired by all his neighbors.  Another thing that brought Dan joy was animals, especially dogs.  He always had a four legged companion by his side throughout his entire life.

Dan was preceded in death by his parents, John and Mildred Harmon. He is survived by his wife, Elaine Harmon; his loving children Bryan, Julie (Rick) Brown and Adam (Sommer); his dear sister, Susan (John) Klein; precious grandchildren, Kyla Curtis, Collin and Case Harmon, Bella, Will, Matthew and Michael Brown and Keaton Clements, Landon and Annie Harmon, a host of devoted family members and cherished friends, and his sweet little 4 legged baby, Roxie.

A Celebration of Life will be held on Saturday, September 4, 2021 at the Muscatine National Guard Armory located at 5901 S Highway 61 in Muscatine, IA.  A light luncheon will be served at 12:00, followed by the Honor Guard Military Salute at 1:00 and then a time of remembrance of Dan.  A memorial gift may be made to the Rock Island Depot Museum in care of The Eldon Depot Committee, Inc., P.O. Box 68, Eldon, IA 52554.

To send flowers to the family or plant a tree in memory of Dan Harmon, please visit Tribute Store
Print
Saturday
4
September