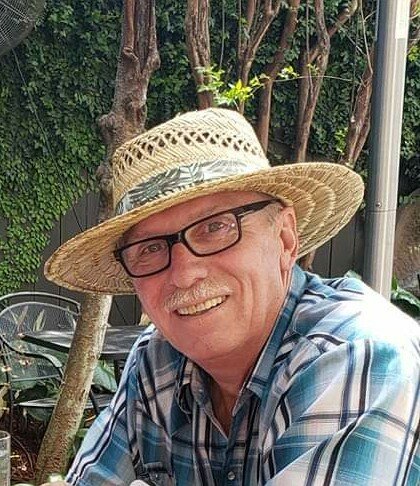 My life started with this man in April of 1998 and this is my tribute to how wonderful he was. We met when his band filled in for only one night and I just happened to go to that bar. He came to my table and when I saw his beautiful eyes, I knew he was something special.

Tom told me early on in our relationship that his “main job was to make me happy”. And he showed me over the next 23 years how much he meant those words.

When we first met Tom wasn’t interested in getting married again. I remember saying one day “I’m not interested either right now, but if someday I would like to get married, would you consider it?” He said, “If that would make you happy, I will do it!”

Once a year we went to ND to see my family. While visiting with my Mom and Dad the conversation would drift to the goings on in my hometown. Even though he wouldn’t know anyone we were talking about he would sit patiently and just listen.

When my brother who lived in ND had an accident and we were living in Tucson, Tom didn’t hesitate and insisted I go even though he couldn’t due to our finances. He knew I needed to be there.

Tom was a musician and therefore very creative. He wrote a song for me and he always wrote “ST “on the cards he gave me. It meant “Sweet Thing”. Whenever he posted something about us on Facebook, he called me “the Brunette”. I knew he was the man for me when I found out he was as addicted to chap stick as I was!

Tom knew a little bit about a lot of things. He called it useless trivia but I was impressed.

Whenever I had a disagreement with someone, I would mention it to Tom and he had the knack of getting me to see both sides.

He was one of those few men that knew how women thought. It was a rare gift and I cherished it.

He showed his love for me every day. He would call me at work just to chat because he couldn’t wait until I got home to hear my voice.

Tom was quite a talker. When one of my friends first met him, she told him he was a handsome man. I told her you have done something no one else has accomplished. You have rendered him speechless!

Our life together was filled with laughter. When he made me smile, his got a little bigger.

We didn’t have a big group of friends. We just enjoyed each other’s company. I miss my Friend, my Husband, my Pal!

Love Ya HONEY! I’LL BEING SEEING YOU AGAIN!

To send flowers to the family or plant a tree in memory of Tom Newhouse, please visit Tribute Store

Share Your Memory of
Tom
Upload Your Memory View All Memories
Be the first to upload a memory!
Share A Memory
Send Flowers
Plant a Tree