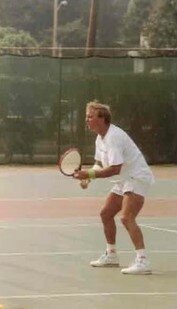 After nearly 84 years of joy, Bruce left us early in the morning of January 29, 2022.   Born on June 4, 1938 in Lynn MA, Bruce grew up educated and playing sports in and around the Lynn area.  When asked his religious affiliation, he always replied “which ever church league team needed a basketball player.”

After receiving his Master’s degree from Salem College, Bruce began a teaching career that extended nearly four decades. He was also a popular coach of football, baseball, and basketball in the Marblehead Public Schools.

Weekends found him singing and playing keyboard with his band “The Good Times.” --- a fixture on the local music scene ---  and, of course, pursuing his passion of tennis. He collected multiple trophies for doubles and his plaques still hang on The Beach Club walls as Men’s Doubles Club Champion.

After his first marriage ended in divorce and a few “howling singles” years, he found his lifetime companion, Kim, who he often described, lovingly, as “the little brother I always wanted.”  They were married in 1989 and he somehow mentored her into his mixed doubles partner.

When the cold winters in Marblehead got to them and skiing no longer seemed the answer, he took early retirement and they headed to Tucson with the intentions of leisure and sport.  But, it didn’t take long for his talents at teaching and coaching to be discovered.  He became the first director of the fledging Tucson Community Tennis Program, an organization that introduces the sport to thousands of fifth graders in underserved schools. He served in that capacity for 12 years.

A celebration of his life will take place this summer in Marblehead MA.