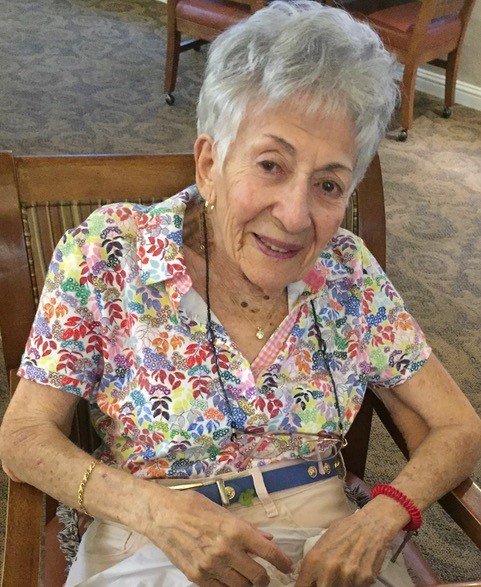 My dear mother, Beverly Smith, died on Dec. 24, 2019 at home in Tucson, Arizona. She was born Oct. 17, 1926 to Louis & Mollie Pine in Manhattan, NYC, and grew up in the Bronx. After a storied career of picking up sailors (she always claimed), Bev met her future husband, Lester Smith, a US Marine, at a local party shortly after WWII ended. They married on Feb. 23, 1947, eventually moved to Queens, and raised 2 daughters.

Bev was a stay-at-home mom when we were young, though she later worked as a bookkeeper in her father’s business, “Stratton Fabrics”, in the heart of the Manhattan garment district. My parents moved to the southwest in 1978 and settled in Tucson, AZ. Although my mom would have preferred not leaving her beloved city, she did it for my Dad. For several years, she worked in a printing business and developed a very close friendship with Rhoda Tillem, a customer, which lasted until Rhoda’s death many years later. Upon retiring, my Mom enjoyed bowling, playing tennis, swimming, bike riding, and along with Dad, visiting their 5 grandchildren in Maine & Texas. Following my Dad’s death in 2006, she moved to a local retirement community, where she was loved by her fellow residents. Mom enjoyed socializing down in the dining room at dinnertime and playing Bingo twice a week. She had a sharp sense of humor and could curse with the best of them!

Mom had been spoiled by my Dad’s ability to fix anything, and after his death, his co-worker and great handyman, Carl Cantin, looked after my mom for years and helped her out when needed. They became close friends and she always said that if she were younger, she would have snapped him up!

More recently, as she needed additional care, Bev engaged the services of Eva Schmid who gave my Mom 3 years of very loving care, earning a place in our hearts and our family. When round-the-clock care became necessary, two of Eva’s sisters came onboard, Rosa & Martha. I will always refer to them as the 3 Angels because that’s who they are. My family and I are forever grateful to these remarkable women.

To send flowers to the family or plant a tree in memory of Beverly Smith, please visit Tribute Store

Share Your Memory of
Beverly
Upload Your Memory View All Memories
Be the first to upload a memory!
Share A Memory
Send Flowers