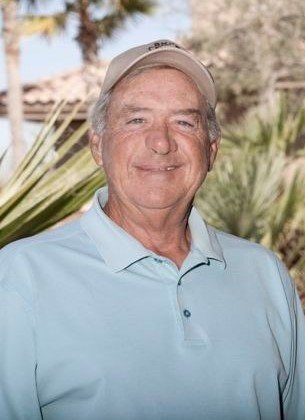 Dan was born in Lake City, AR, grew-up in West Memphis, AR and graduated in 1964 from West Memphis High School.  In 1966 he proudly joined the United States Marines and served in Viet Nam.  He returned home in 1968, went to work in the finance industry, moving to Southern California in the early 1970s.  During a very successful career, Dan rose eventually to the position of President and CEO of Valley Federal Savings & Loan.

In 2005, the final move was made to Quail Creek, in Green Valley, Arizona.  Dan loved playing golf and all the competition and socializing surrounding it.   He traveled, usually to a golf destination, but generally just enjoyed life, golf and the retirement community surrounding him.

Dan and Cathy would like to thank nurses Tracy and Carmen from Arista Hospice for the outstanding care they provided.  Also, thanks go out to the many friends and family members that offered love and support during their time of need.

To send flowers to the family or plant a tree in memory of Danny Nelms, please visit Tribute Store
Print
Share A Memory
Send Flowers