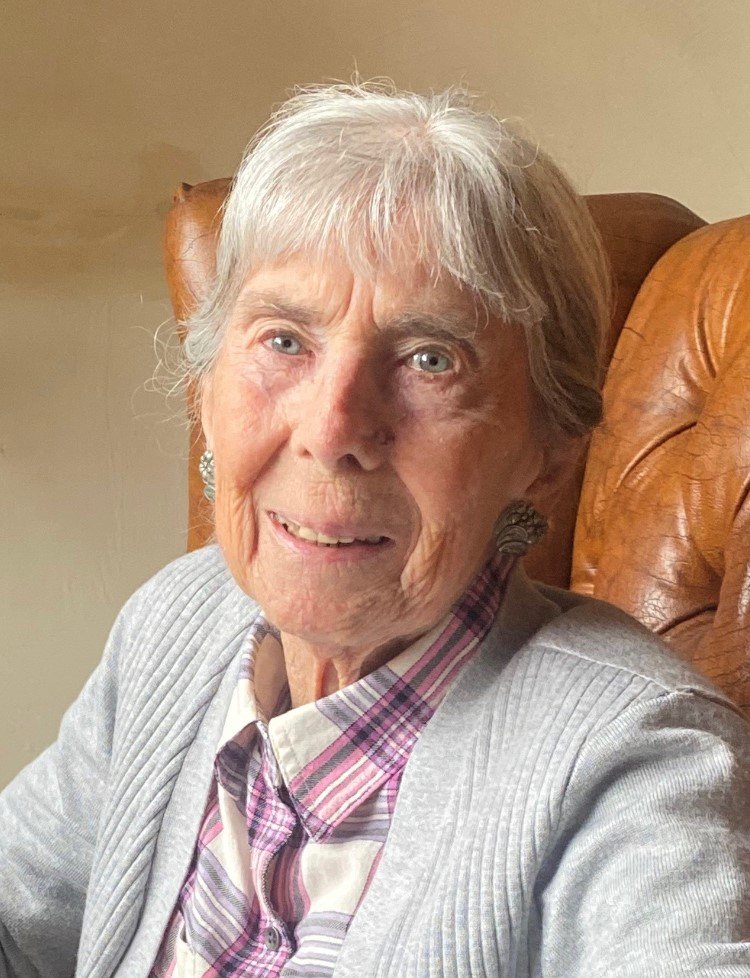 Helen Titley passed away at the age of 94 in Tucson, Arizona. As poet Maya Angelou writes, “People won’t remember what you said. People won’t remember what you did. But people will remember how you made them feel.” Helen made her beloveds feel cared for, seen, and appreciated. A teacher, nurse, wife, mother, grandmother, dog lover, and nature lover, she was always well-regarded as a kind and thoughtful person.

Helen was born in Ontario, Canada to Clara Ball Ruxton and James Ruxton. The eldest of five siblings, she grew up in the small towns of northern Ontario with the twins Jaqueline (“Jackie”) and Jackson, her sister Loretta, and brother Alan. Their parents allowed them to go wherever they liked and stay out as long as they liked, provided the five of them always stuck together. They would snowshoe in winter and swim in summer, always accompanied by a family dog. She remembered fondly that one of the family dogs was not only smart, but also wise. When the children would swim out too far in the lake, he would paddle after them and swim circles around them until they turned back to shore.

Helen and her siblings were educated in a one-room schoolhouse. Because there were deaf students in the school, the other children learned sign language so they could sign to one another behind the teacher’s back. Helen had a feisty spirit and at times, a fiery temper. There was a day when the teacher was mean to her brother, Jackson, and Helen became so angry that she threw her ink bottle at him. Later in life, her spirited personality came to the fore while watching her grandson, Alex, play soccer. She could get riled up at times and reprimanded the referee.

Helen’s father was a ranger with the Canadian Forest Service. He once took her and her brother Jackson for a ride on a handcar, which was a vehicle that traveled on railroad tracks, powered by a hand pump. When a train suddenly came hurtling around the corner, he quickly threw Jackson to safety. He and Helen were hurt in the incident, but thankfully not too badly.

Another favorite story Helen liked to tell about her childhood took place in winter. Her father discovered a trapper who had curled up and frozen to death in the woods. He brought the corpse home and put him in the bathtub in the basement, filling it with warm water to try to thaw him out in order to be able to fit the body in a coffin. But while this grim task was taking place, a party was going on upstairs. Helen remembered that all night long, her father would keep disappearing into the basement to put more wood on the fire.

After Helen graduated from high school, she earned a teaching certificate and taught in a one-room schoolhouse. From there, she went to Toronto and earned a degree in nursing degree from Toronto General Hospital School for Nurses in 1949. Shortly after graduating, she moved to Denver to work as a nurse—a brave adventure for a young woman in 1951. One evening, she went on a blind date. That’s how she met her future husband, Spence Titley.

Helen and Spence were married in 1951, and planned to spend their honeymoon hiking and camping. But the first night on the mountain was so cold that even with their sleeping bags zipped together, they couldn’t get warm. “We nearly froze to death,” Helen remembered. For decades after, her husband liked to joke that he thought he’d lost her when she stomped off down the mountain the next morning. Happily, they worked it out. Spence and “Rux,” as he called her, spent 68 years together, until his passing in 2019.

Shortly after their marriage, Helen followed Spence to Camp McCoy, Wisconsin, where he was commissioned as a 2nd lieutenant in the US Army and was preparing to deploy to Korea. She gave birth to their first child, Ronald, during the middle of a Midwestern blizzard in January. After Spence went overseas, Helen was on her own with a newborn. She moved in with Spence’s grandparents, telling a friend that she missed her husband and wanted to be around people who reminded her of her husband.

Helen and Spence were reunited after his service ended. Daughter Jane was born in Denver, and then the family moved to Tucson. Spence attended graduate school in geological engineering at the University of Arizona and Helen worked as a nurse at St Mary’s Hospital until child number three, Jennifer, arrived. While Spence focused on his career as a geologist and professor—eventually becoming Distinguished Professor of Geosciences—Helen raised their three children as well as the many German Shepherds, Labradors, English Setters and cats that were part of their family over the years.

Helen taught all her children to read and instilled in them a love of books. She fostered in them a deep appreciation for language. Her favorite genre was mystery novels, and she was an avid crossword puzzle fan as well. She was also a wonderful cook and had an impressive collection of recipes. In the fall and spring, she made the most of the Arizona weather and grew beautiful flowers. She enjoyed watching the hummingbirds come to her feeders. But every summer she and the children would go back to Canada to visit. She often missed the north, and her children say her Canadian accent would always get stronger during those visits. Later in life, she would become frustrated with the triple-digit desert heat and declare, “I want to be in Canada!”

One of Helen’s abiding passions was history. The Ruxtons had roots in Scotland, and her children say she had an almost encyclopedic knowledge about the English monarchs and their reigns. When Jennifer was in high school, Helen decided to go back to school. She earned a bachelor’s degree in French and World History from the University of Arizona. Her children, son-in-law, and grandchildren were also Arizona Wildcats. Helen and Spence were passionate Wildcat fans for years, holding seasons tickets to football and basketball games.

When she and Spence became empty-nesters, Helen started volunteering for Hill Haven Hospice. In 1986, she became a dedicated volunteer for a newly launched nonprofit organization called Top Dog, which trains and certifies service dogs for people with disabilities. One of the founders, Lydia Kelley, credits Helen with being a vital part of Top Dog for decades. She recalls, “Helen helped us devise our certification test and was a certification evaluator. I have no idea how many teams she certified, but it was a lot. She was part of the training committee from the beginning, helping us keep the program fresh, and she went on many home interviews for perspective students, to evaluate both the person and dog as potential Top Dog teams.”

Helen loved dogs her whole life, and she channeled all her energy and passion into her volunteer work. In her later years, many people in Tucson knew Helen as the “mother” of Devon, her English Setter, whom Helen used to take to nursing homes as a therapy dog. She once told a story about a resident who had Alzheimer’s. She invited the man to pet Devon and said, “Do you feel the bump on his head?” and the man—who had been rather vague up until then—suddenly replied clearly, "That’s how you can tell she's purebred." She and Spence were both longtime volunteers for the Old Pueblo Dog Training Club, assisting with training classes and servings as stewards at their dog obedience shows.

Under Helen’s diligent care, gardens bloomed, children grew, delicious meals were made, clothes were sewn, service dogs were trained, and in the process the world was made more kind. Helen lived a beautiful life. She and Spence traveled the world. She visited son Ronald in Australia several times and journeyed to Papua New Guinea, as well as taking many trips to Canada to see her family. She nurtured her intellectual gifts, and pursued her passionate interests. Above all, Helen Titley cultivated a loving heart.

Helen’s grandchildren, Alex and Isabelle Rubio, describe her as their role model and mentor. “She was kind to everyone, protected us, and always took care of others first,” says Isabelle. She remembers that every morning, Helen would make sure the bird feeders were filled. She was always baking something, knitting, crocheting, and quilting, or sewing clothes for Isabelle’s Barbie dolls. “You could see how much effort Nana put into every single thing she did. And she always did it with so much consideration. I try to always have something sweet to say to others, just like my Nana.”

“She set an example of being a very thoughtful and positive person,” says Alex. “I always felt loved and seen by both my grandparents. That left a positive impact on my life. Knowing that my grandparents really loved me and that they were there to support me and the things that I like to do.” He remembers that when he was reading the Harry Potter books, Helen read them at the same time so they could discuss the story. “I learned from my grandmother to appreciate family,” he says.

Helen and Spence both adored being a grandparent, never wanting to miss a single soccer game, piano recital, dance concert, graduation, birthday celebration, and more. Isabelle and Alex both have fond memories of sleeping over at their grandparents’ home. Helen would get on the floor and play with them. She taught them board games, did crafts with them, helped them learn how to swim (and later raced them across the pool), and took them on adventures. Their favorite times were hikes and picnics at Saguaro National Park East, where they explored the desert together. Both say Helen instilled in them a deep appreciation for the outdoors, and for spending time with family.

Helen will be missed by all her family and friends. She is survived by son Ronald (Jane Broadbere) of Gloucester NSW, Australia, and daughters Jane Titley of Tucson, and Jennifer Titley-Rubio (Martin Rubio) of Tucson, and grandchildren Alex Rubio and Isabelle Rubio, as well as sister Loretta Cronk of Ontario, Canada.

To send flowers to the family or plant a tree in memory of Helen Titley, please visit Tribute Store
Saturday
13
March

Share Your Memory of
Helen
Upload Your Memory View All Memories
Be the first to upload a memory!
Share A Memory
Send Flowers
Plant a Tree